NCAA TOURNAMENT 2022
Where it ended for the Terps- a special group that fought hard until the final buzzer.
Until next season... 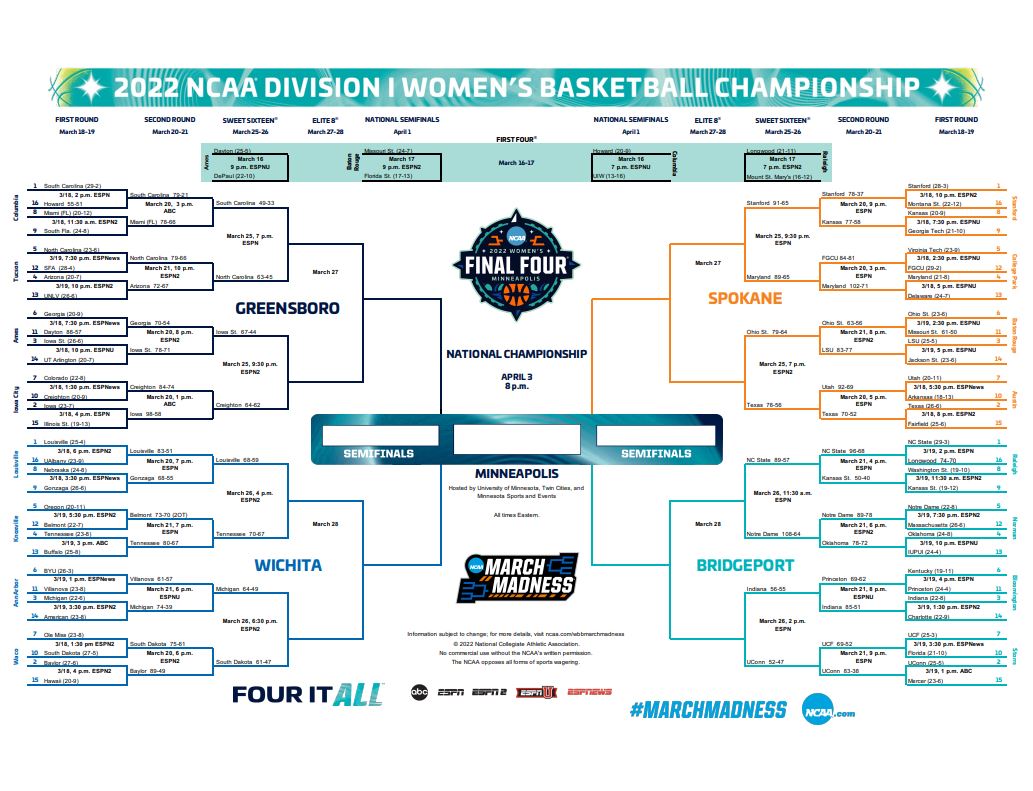 Maryland played Stanford earlier this season when they met way back in November at the Thanksgiving tournament in the Bahamas. Short on players, but not on fight- the Terps lost the game 68-86. Maryland was without the services of Katie Benzan, Diamond Miller and Faith Masonius for that first matchup. Stanford starters played the bulk of the minutes, but 14 of their 15 player roster recorded time in the game.

Stanford won the 2021 national championship, lost only one starter, and added four freshmen and one transfer to their roster for the 2021-2022 season. They are balanced, efficient, and disciplined.  The Cardinal are led by Coach Tara VanDerveer, the all time winningest coach in women's basketball. She's been at Stanford since the 85'-86' season and had previous head coaching jobs at both Idaho and Ohio State. Stanford has a lot of players who get minutes, but the big three on the squad are 6'1" senior guard Lexie Hull,  6'1" junior guard Haley Jones, and 6'4" sophomore post Cameron Brink. Hull and her twin sister Lacie, also a skilled Cardinal guard, are Spokane, WA natives.

Expect two teams that have evolved throughout the season, providing a wholly different matchup than the November meeting. Stanford, who lost to Texas earlier in the season, would not complain about an elite eight re-match against the Longhorns. A couple things need to happen for that to take place and the Terps would love to do their part to spoil that opportunity for the Cardinal. Maryland has played some of their best basketball of the season in the first two tournament games. They are scoring, defending, sharing- and the results have been a whole lot of fun. Here's to more fun! Go Terps!


Posted 3.19.22
FAN SCOUT - Maryland vs Florida Gulf Coast
Florida Gulf Coast University is located in Fort Myers, FL. Founded in 1991, with classes starting in 1997, the university recently celebrated its 25th anniversary. The school has grown from about 2500 students in that first year to a current enrollment of over 15,000 and 15 intercollegiate athletic teams competing at the NCAA DI level.  They're really good at it, too- racking up 87 conference and tournament titles in 14 years. The women's basketball team accounts for 20 of those and has won a conference title, tournament title, or both, every year since 2011. They compete in the ASUN Conference.

Coach Karl Smesko has been there from the beginning, building FGCU into a perennial winner. He is now in his 20th season at the helm.  Earlier this season, he recorded his 600th win as a head coach, reaching the milestone faster than coaching legends Pat Summitt, Tara VanDerveer, and C. Vivian Stringer. Coach Smesko was an assistant coach at Maryland in the 1998-1999 season.

This team launches threes! They are tops in the nation in 3-pointers attempted and 3-pointers made, per game. They have shot over 1100 times from behind the arc this season. The Eagles  average over 78.5 points per game, ranking them 9th nationally in scoring offense, just behind the Terps. Everyone on this team can shoot the three and everyone is a guard. Kendall Spray has a 45% make rate from the three and is tops on the team in 3-point attempts. A big guard, Kiersten Bell, who spent her freshman season at Ohio State, leads the shooting barrage overall, averaging 23 points per game. She missed 9 games this season, following a knee injury and surgery, and got back on the court in late February. In yesterday's game versus Virginia Tech, Bell put up 22 points in 33 minutes. She's versatile.

Expect a well coached team with a chip on their shoulder, dissatisfied with their 12 seed. They are not prone to mistakes and won't be willing to change that trend against the Terps. They meet a Maryland team that thrives when they share the ball and play for each other! Bright lights, big stage, huge game. Go Terps!


Posted 3.14.22
FAN SCOUT - Maryland vs Delaware
Maryland secured the #4 seed in the Spokane Region joining #1 Stanford, #2 Texas, #3 LSU as the top four seeds in that quarter of the tournament bracket. The excitement that each team experiences when their name is called on Selection Sunday is short-lived for many, as the tournament quickly spits out half of the 68 teams by the end of the first days of competition. The "one game at a time" mantra may sound like an overused sports cliche, but when it comes to the NCAA tournament, it could not be more accurate. And if it seems like winning two games to get to the next weekend of play shouldn't really be that hard (or 3 in the case of the expanded play-in teams,) the odds are tough ones- but that makes it even more precious for the 16 sweet teams and their fans.

Maryland meets Delaware in NCAA first round action. The Blue Hens captured the CAA crown, defeating Towson in the waning moments of the semi-final game, and Drexel 63-59 in the finals. Delaware is led by 2X CAA Player of the Year and Baltimore native Jasmine Dickey. She ranks among the top 5 national leaders in field goal attempts (1st), scoring (2nd), free throws made (2nd), free throw attempts (2nd), points per game (3rd), and field goals made (5th). In other words, she can score! As a team, Delaware averages 72 points per game. Dickey averages 25.1 of those points, with the scoring balance coming from R-senior post Ty Battle and sophomore guard Tyi Skinner, who average 13.3 and 12.9 respectively. Battle and Dickey both boast double digit rebounding stats as well. Head Coach Natasha Adair has been at Delaware since the 2017-2018 season. The Silver Spring native and alum of Albert Einstein HS, was the head coach at Georgetown University from 2014-2017 prior to making the move to Delaware. She was also the head coach at College of Charleston from 2012-2014.

Maryland enters the game with a healthy and experienced squad that has admirably weathered its share of challenges this season and forged through a demanding schedule. They have been tested in many ways. Expect all teams to start the tournament with an identical 0-0 record and similar, if not identical goals. It's tournament time! Enjoy the Madness and Go Terps!
​

Posted 3.10.2022
FAN SCOUT - SPECIAL NCAA TOURNAMENT EDITION
There's been no shortage of drama throughout the 2021-2022 women's basketball season. And really, isn't that the reason we love to watch sports?! Who picked Kentucky over South Carolina to win the SEC Tournament? How about a top ranked Louisville team losing to unranked Miami in the first round of the ACC Tournament- anyone have that one? We started the season hearing how deep Connecticut was, then plot twisted to a lean roster, and now arrived full circle with Husky stars available and competing. The Top 25 rankings shuffled mightily from November through March and it kept us watching, cheering, jeering, enjoying. In March, we all take it up a few notches!

The Terps have had their own obstacles to overcome this season. What may have been the toughest non-conference schedule we've built, combined with a much improved conference, resulted in an end of season #6 "strength of schedule" ranking. The Terps faced more than just their opponents along the way- enduring season ending injuries, nagging injuries, illness, grief, game cancellations, and more. We never backed down. The not quite post-Covid year, presented fewer restrictions but it's own unique challenges to all teams and their fans. Through it, all of us navigated the season to arrive at what we can now officially call "March Madness."

March Madness 2022
-This is the first year that the trademarked term "March Madness" will be used for the NCAA Women's Basketball Tournament
-The top 16 seeds have the option to host the first and second rounds
-This year's tournament will feature 68 teams, same as the NCAA Men's Basketball Tournament
-Play-in games for the last four teams in, will be played on Wednesday, March 16 & Thursday, March 17
-The first and second round games will played Friday, March 18 - Monday, March 21
-The four regional sites are - Greensboro, NC and Spokane, WA with games on March 25 and  27; Bridgeport, CT and Wichita, KS with games on March 26 and 28
Proudly powered by Weebly